On this page you will find photographs of replicas of some of the famous Lyres as well as other Lyres that do not follow the usual replica idea but are built with the idea of performance as their main goal. Most are built by keen amateur makers rather than lutiers of distinction. It will show the various possibilities based on the basic shape and design. 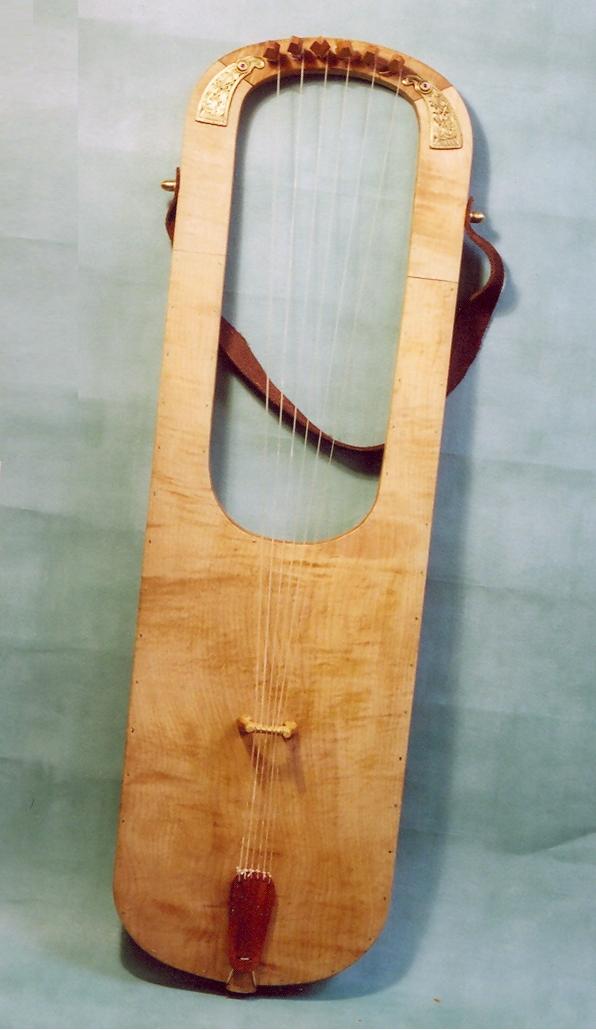 above: A replica of the Sutton Hoo Lyre made by Michael J King. The Prittlewell (has metal tuning pegs) and Burgh Amph Lyres are virtually the same in size, build and look.

above: A replica of the Morning Thorpe Lyre made by Michael J King

above: A replica of the Trossingen Lyre with Kolrossing technique and design work by Michael J King. For the original see the picture further down the page. Notice the extreme length of the instrument. 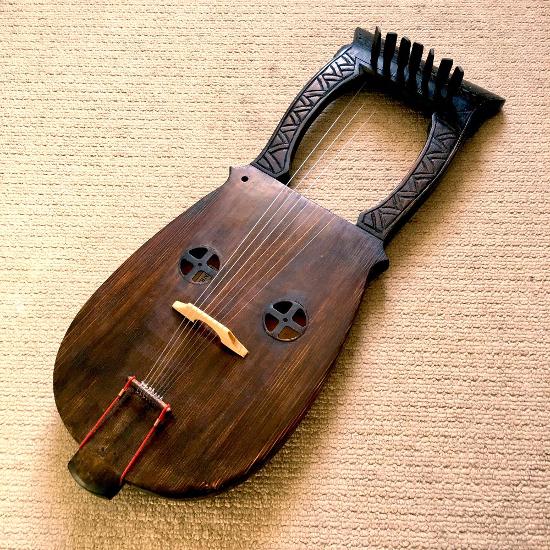 above: A replica of the Kravik Lyre made by Michael J King. The body and soundboard are made from soft woods and then the wood is died to a darker colour.
The images below are original instruments that have survived or are of peoples instruments that they have made, or have had made for them. 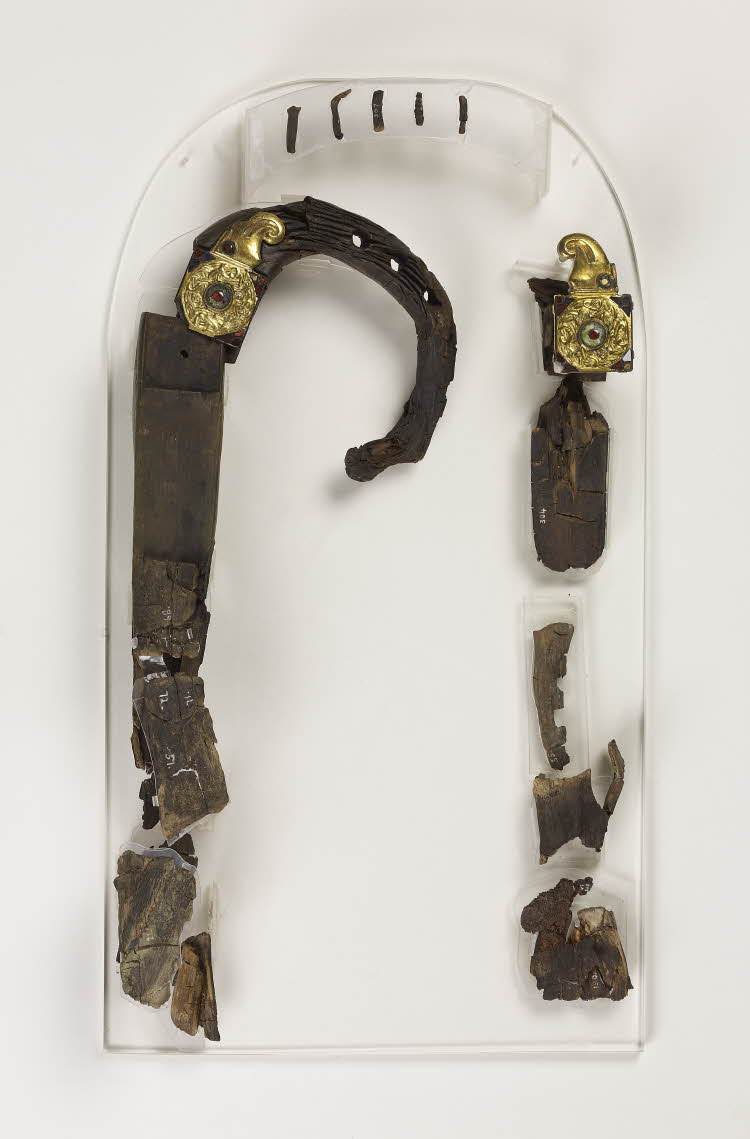 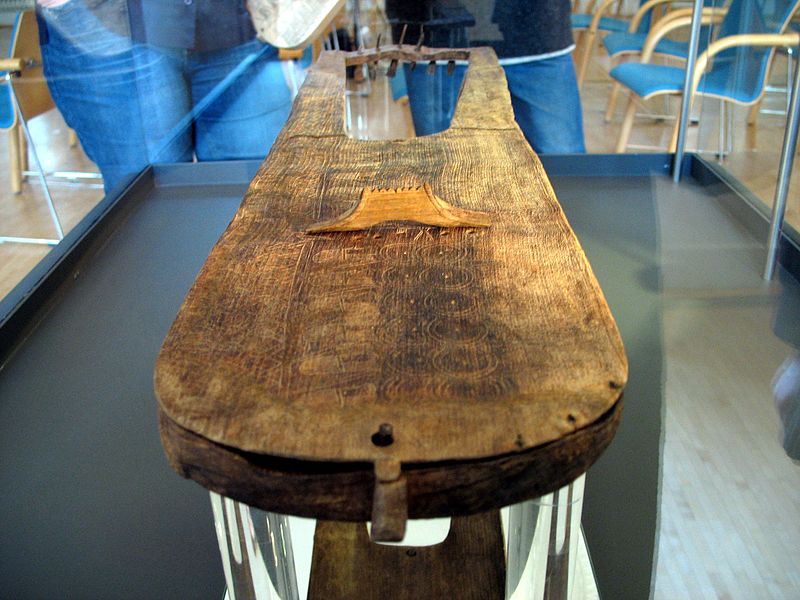 A Trossingen Lyre, and just visible on the surface of the face is the Kolrossing technique design. This exact design has been replicated by Michael J King on his instrument as seen in the picture above. 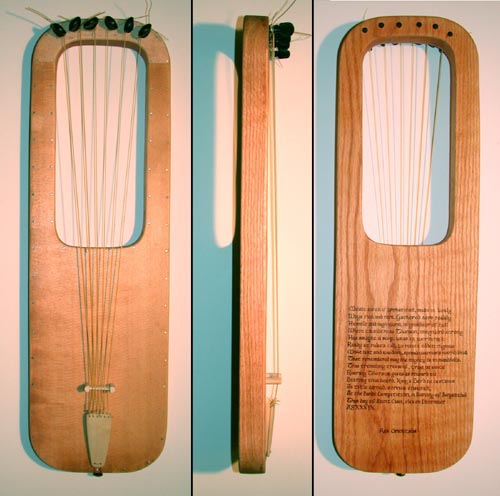 An engraved Lyre by Paul Butler 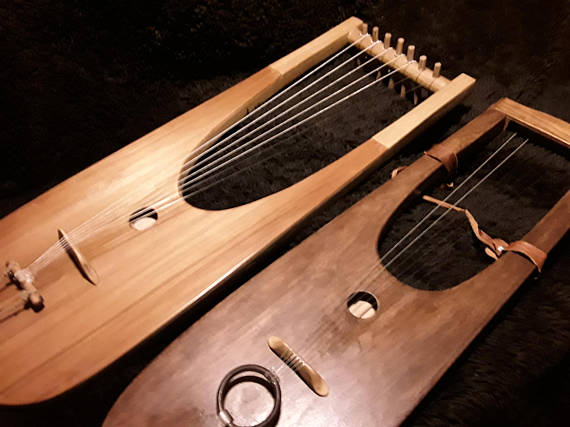 Two Lyres with different concepts in their designs. 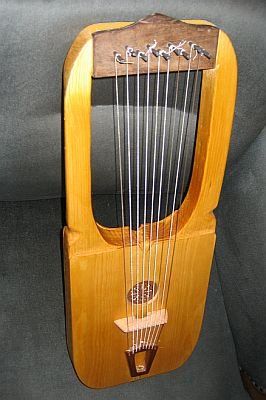 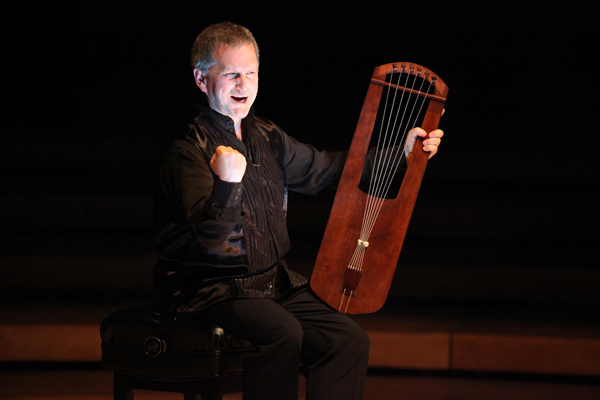 Benjamin Bagby playing his Trossingen copy Lyre in a performance of "Beowulf". 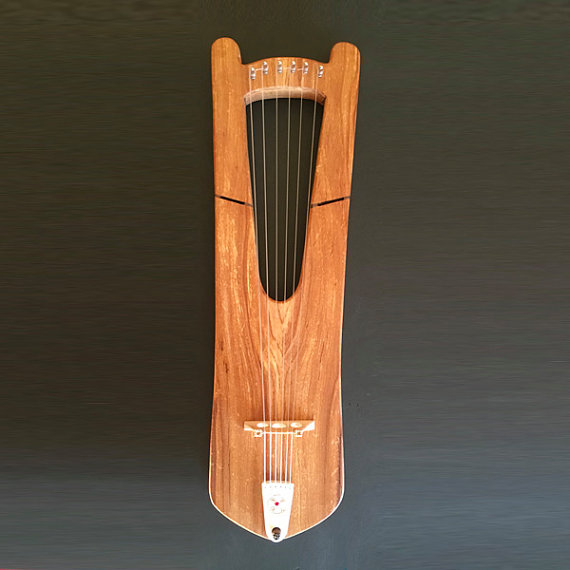 A small Germanic Lyre known as a Rote. 23 inches high and only 6 inches across. 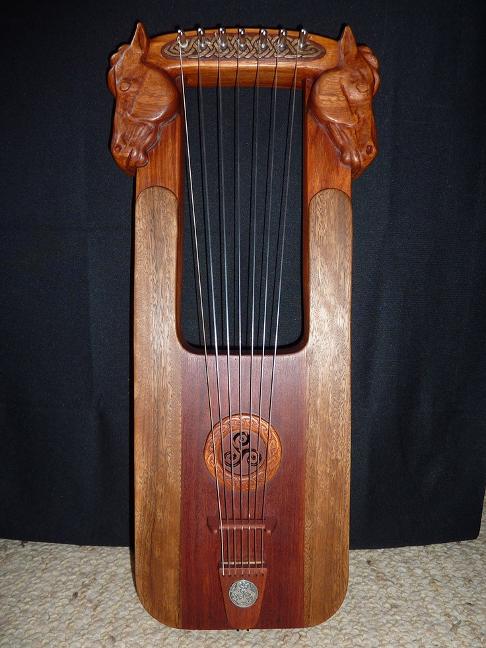 A beautifully carved example of a Lyre. Maker unknown. 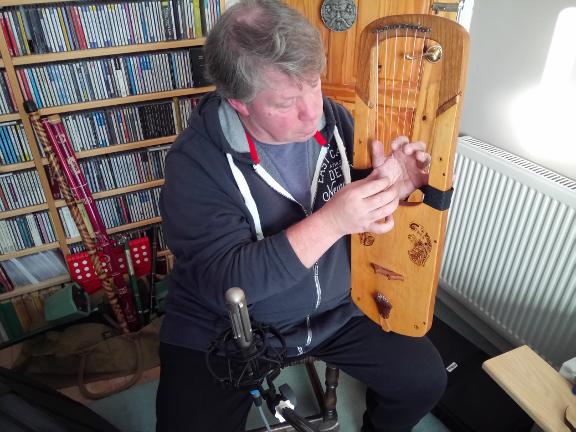 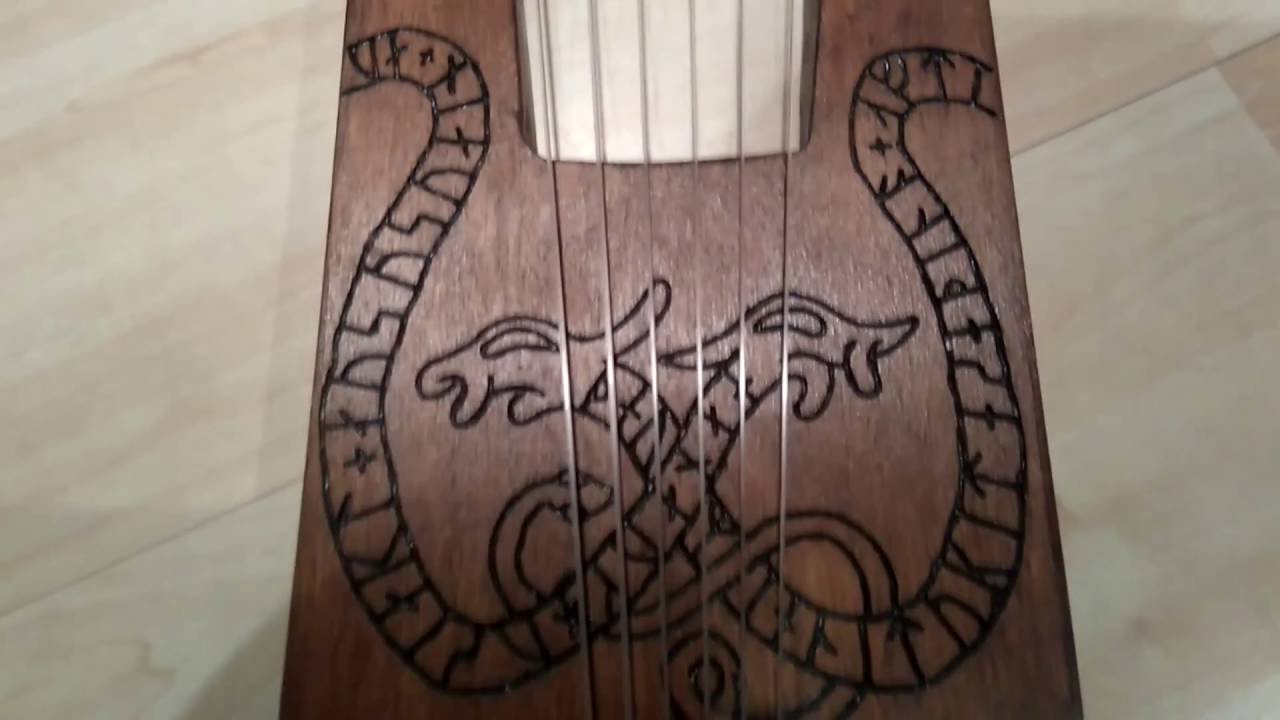 Dragon design with Runes carved into a Scandinavian Lyre showing what can be done if your mind is put to it. 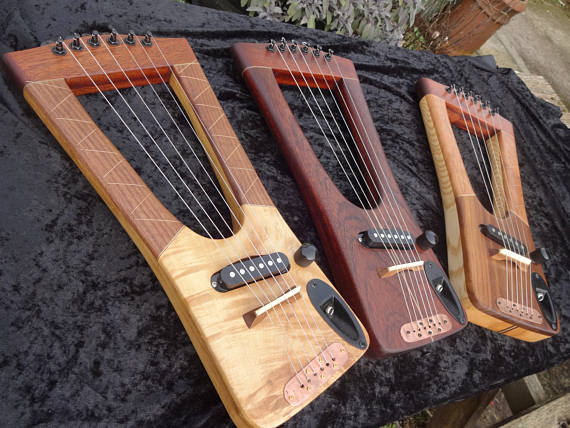 Three electric Lyres produced by Etsay. Maybe this is the future for this ancient instrument? 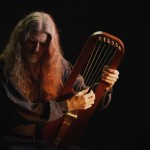 The traditional image of an Anglo Saxon Scop! 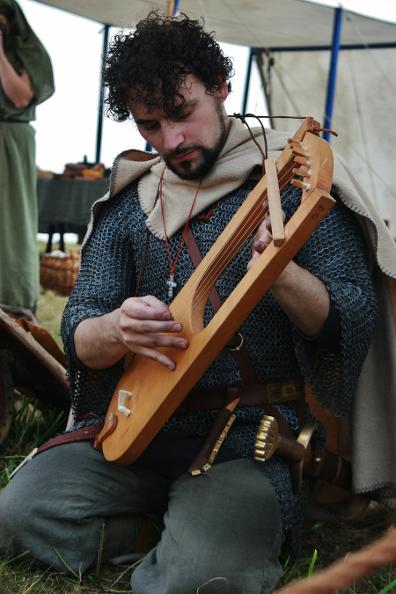 A Housecarl (Old English: Huscarl) Scop from a re-enactment society. Note the blocking and strumming technique being used. Also instead of a wrist strap this Scop has the instrument on a leather thong length around his shoulder and neck for flexability. Also note the Seaxe blade in its sheath on his belt (not the sword). This is where the Saxons got their name from, the Seaxe knife. 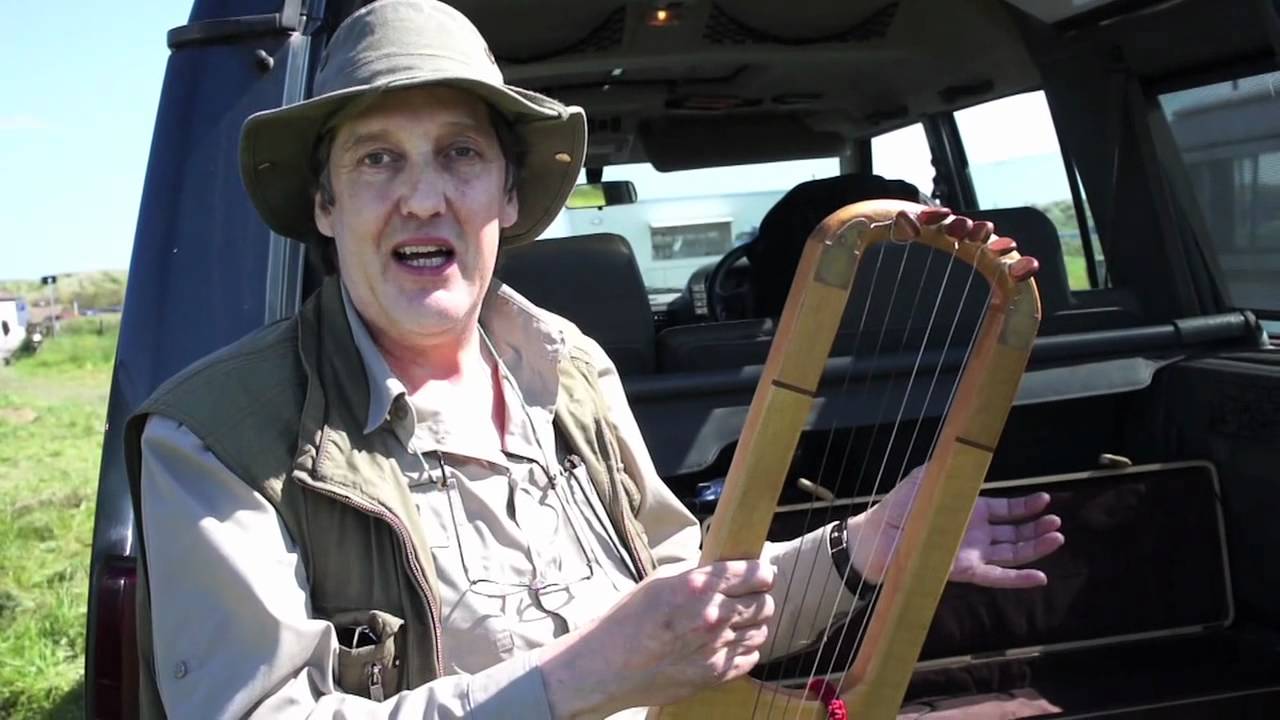 Dr Sam Newton explaining on the TV series "Time Team" about the role of the Scop in Anglo Saxon Society and what it may have probably sounded like. He is an authority on the early kingdon of East Anglia, and his book entitled "The Origins of Beowulf" is an absolute must if you are interested in Anglo Saxon literature and its origins, especially the great epic classic of Beowulf.
To all Lyre makers and players. If you have any pictures of your instrument/s do get in touch if you would like me to put them on this site. I may not be able to get all of them on here but do contact me via the contact page anyway. Lets get using this site for all manner of interesting Anglo Saxon Lyre stuff.
Next Page