THE REASONS FOR THIS SITE AND HOW IT BEGAN

It is a strange thing how many ideas and concepts begin and my first contact with this most enigmatic of musical instruments came about many years ago when I was researching into some rather rare instruments of Wales. I came across the unique instrument called the Crwth, now fairly well known but not so back then. This was a bowed instrument that is box shaped and bowed; something like a Norwegian Hardanger Fiddle in sound, and also for the fact that very often certain strings vibrate in sympathy whilst others are being played. (see pictures below for these instruments.)

From my research into these instruments I learnt that there had once existed something of a hybrid instrument that had been a multi stringed plucked version of the Crwth but this was only known in writings of the early Medieval Welsh scribes and was likened by them to the Lyre found in the 'Englisc' lands. This sent me on a journey to discover the Lyre of our ancestors, and so through various times, more research, and rooting around, revealed an instrument that was unique to the Northern European Lands but had been lost in nearly all cases in favour of the more versatile and bigger family member, the Harp. We are not talking big Triple Concert Harps here but the Brian Boru style Celtic harps and Troubador Harps of the French. 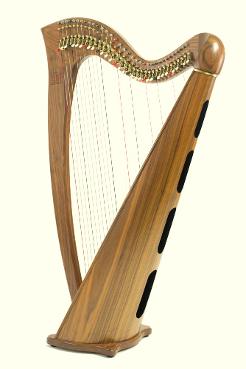 A Celtic Harp (in Scotland known as a Clarsach) 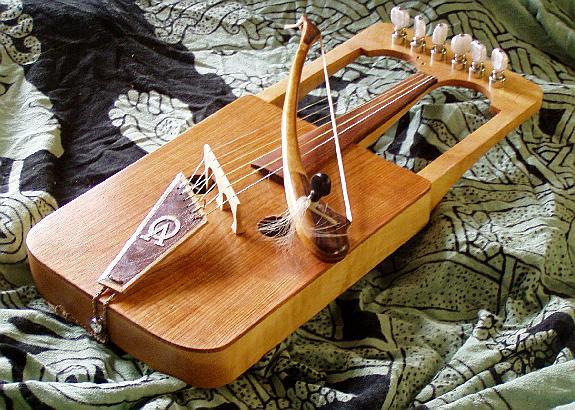 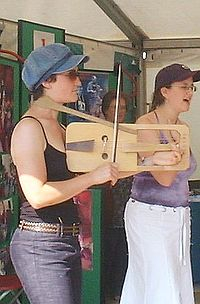 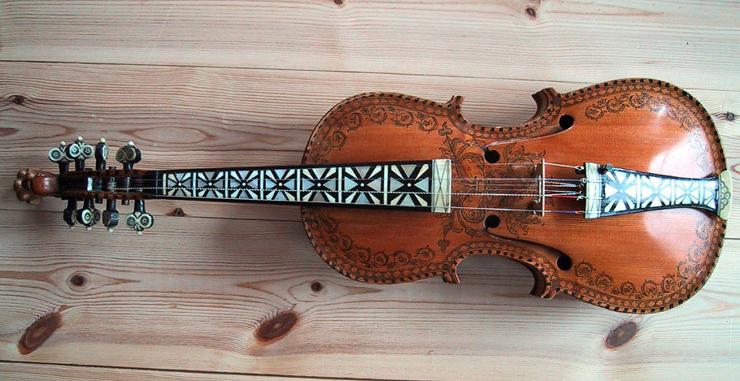 A Beautiful example of a Hardanger Fiddle. Note the strings under the main bowing strings. these vibrate in sympathy to create a unique sound.
It was soon obvious to me that most of what we knew of the Anglo Saxon Lyre (not the Scandinavian version as this survived longer and is fairly well documented) was conjecture as far as tunings, exact sizes and other important information, but through archeological finds such as the Prittlewell, Trossingen (Germany), Kravik (Norway), Oberflacht (Germany), Taplow, Abingdon, Bergh Apton, Morning Thorpe,  Snape, and the most famous of all, the Sutton Hoo Lyres that had been excavated from graves of the early Medieval Englisc period, we were starting to build up a picture of a very important lost instrument. Alongside a certain amount of indepth research and experimental archeology we were, and most definately are, able to reconstruct as near as we can instruments that our ancient Anglo Saxon ancestors would have known and recognised.

Having read about the hybrid Crwth and its Englisc counterpart I tried to find information and images of the Anglo Saxon Lyre but there were then very few extant documents and certainly no internet as such as this was back in the mid 1990's. There were just a few images mainly of the reconstructed Sutton Hoo Lyre in the British Museum and the illuminated manuscript depicting King David playing his Harp (in the Englisc manuscript it is a lyre). The only concrete information I could find was from strange odd books, sites or weird loons as well as odd specialist makers of guitars. These Luthiers were into anything that had strings and could make a sound with a bridge, but what few, very few infact, instruments there were were in their thousands of pounds and not in easy reach of my then near empty pocket. Nothing really changes there then! As the internet grew more snippets of information popped up on the screen to do with Anglo Saxon Music and the odd maker of these very rare and experimental instruments. Finally I came across a maker, and also a different performer, virtually at the same time. Both inspired me to actually set about making my own and attempting to produce and perform on the instrument. The maker was Michael J King (more of later) and the performer Benjamin Bagby (also more of later) who was beginning to perform the opening third of the epic Anglo Saxon poem Beowulf using a Lyre just as our ancestors would possibly have known it.

I ordered the plans for the then three or four Lyres that Michael J King had drawn up but for a number of years sat on them unsure whether I could actually make this instrument. Making an electric guitar is one thing but a truly precise and delicate instrument was something else. Then in early 2015 I decided I was going to study these plans, amalgamate the strongest and most useful elements into a single instrument, draw up my own design and plans which I then proceeded to do. Once the wood was bought, along with the odd specialist tool, I began. Three months later the first sound was made on the instrument and suddenly the past came flooding in with these amazingly gentle, delicate, resonant and subtle sounds. I was hooked. 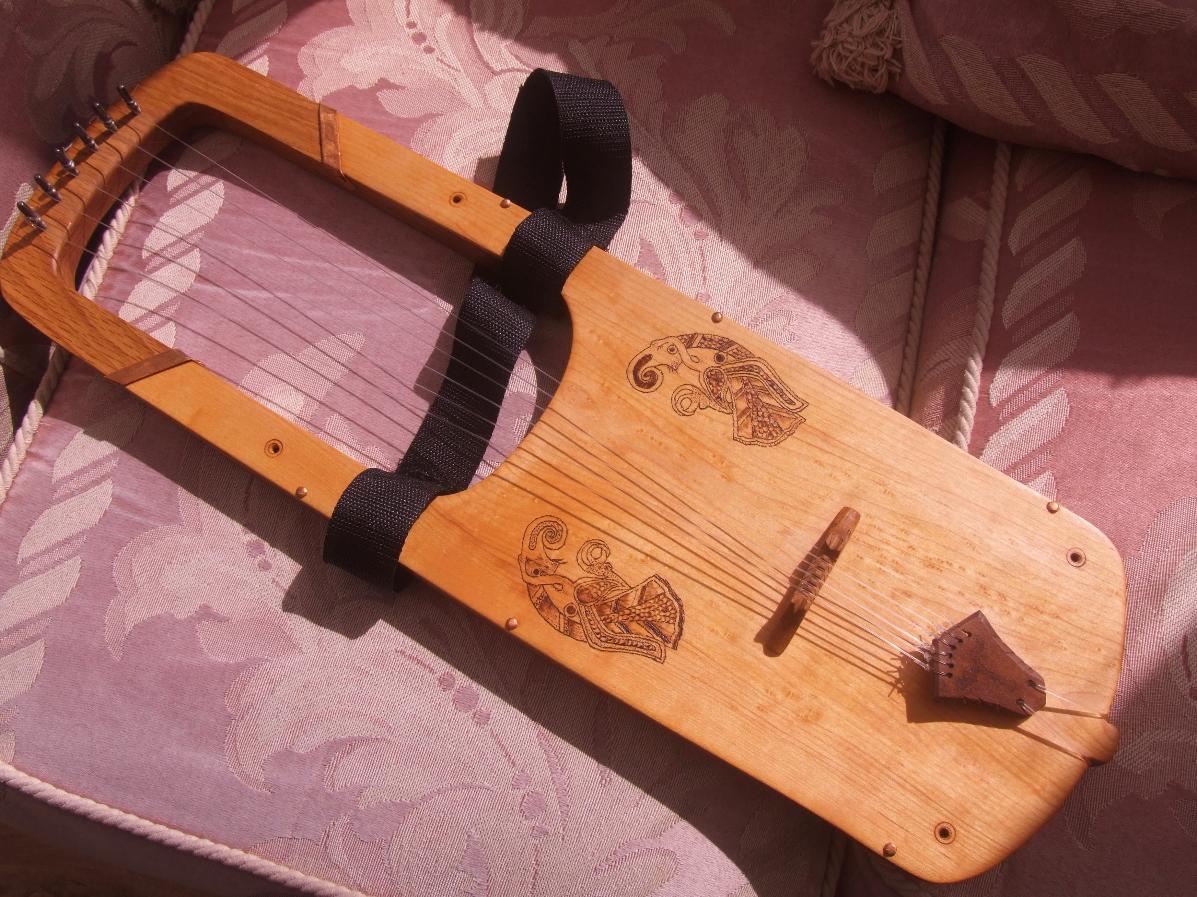 My own handmade Lyre "Two Ravens".
Having made the instrument and begun experimenting with playing techniques I still could find very little on the instrument on the internet other than Youtube clips of some very good players, or some mediocre ones. Plus some rather strange and very basic designs and plans other than Michael J Kings. Nothing of historical or useful evidence. There was very little to actually do with the Anglo Saxon Lyre other than small sections in other peoples sites and so the idea was born to devote an entire website to the instrument in the hope that it may prove a useful and hopefully a valuable source of information, and even research in the future.

So I hope that the articles, pages, projects, recordings and videos may prove inspiring, and please don't hesitate to contact me with ideas, suggestions and questions and I will see what I can do about dealing with them, taking on board suggestions or answering the probably impossible questions such as tuning of the strings etcetera. For that, more later, so please read on and enjoy your trip.
Next Page