tHE PARTSof an Anglo Saxon Lyre

The Parts of the Anglo Saxon Lyre:
These are quite similar to other stringed instruments, but with the use of photographs I will explain what each part of the instrument is and what it does. This serves no real connection to how the instrument is played but will probably be quite useful to wow people with at dinners, or in the pub; that is if you wish to lose friends of course! 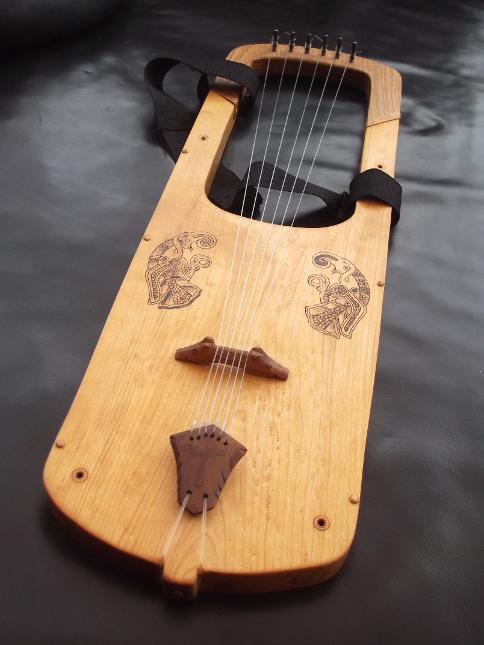 The overall dimesions of the instrument do vary from archeological find to find and build to build so I will give the dimensions that I have used in my own instrument "Two Ravens" that you can see above. It also shows all the key components of the Lyre in one go.

The body is made from a piece of solid American White Oak and the soundboard is a piece of Maple wood. The tail piece is English Walnut and the bridge is again American White Oak carved from an offcut from the body. The soundboard to body 'cover supports' (diagonal pieces on the arms) are copper as are the body tacks which are for ornamentation only as the body and face of the Lyre are glued in place. The tuning pegs are actually Celtic Harp pegs but the originals would have been wood. I have used these pegs simply because it makes it easier to tune up and maintain that tuning rather than the vacariousnous of wooden pegs.

The Head or Stock 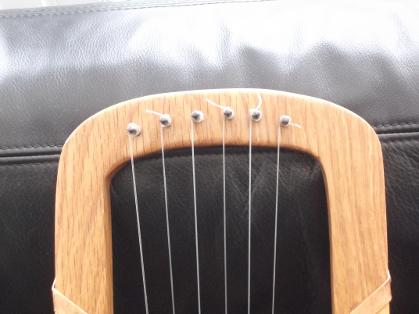 The Head, or Stock, of the instrument is one of the most important and is usually the strongest part of the instrument even though it looks weak. It is sometimes re-enforced by metal plates attached to the back, or bosses (as in the Sutton Hoo Lyre) to the front. It has to take the strain of the strings as well as holding the tuning pegs in place. Along with the Bridge this is where the sound gets transferred to the body of the Lyre to resonate.

Originally the Head would have been a seperate piece of wood from the main body and joined by a jointed technique. I, and many makers now with modern tools, prefer to make the body and head out of one piece of wood for resonance and strength.
The Tuning Pegs 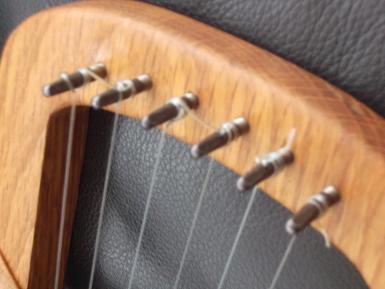 This is the part that the strings are attached to and can be turned by the use of a key to tune the strings to the desired pitches. In the case of my instrument I use a Celtic Harp tuning key that is ideal and I carry this in the case with the instrument. Originally they were made of a hard wood like Oak or Maple but in my instrument I decided to use Celtic Harp tuning pegs that are metal. The reason was a simple one. To hold the tuning. Also they are a lot easier to tune up to the pitch you require without the usual slipping you do get with traditional wooden pegs.
The Arm 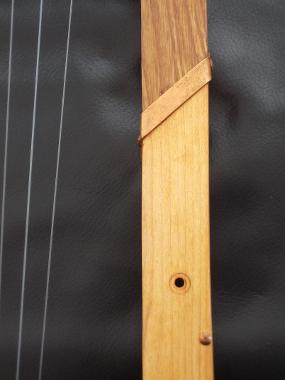 The arm is basically what it says, the arm of the instrument which divides the soundbox of the body from the tuning pegs and head. You can see on the picture, above, the copper soundboard to body 'cover supports' in more detail. They are also for decorative purposes and could easily be etched if you have the skill to do so, but I quite like the simplicity of the plain copper.
The Strings 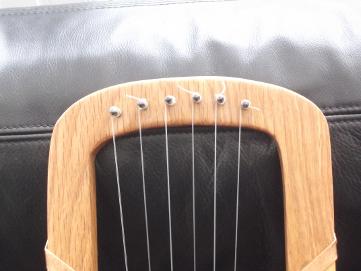 The strings would have originally been made from animal gut in pre-Norman times, and sometimes even metal. The Breton version of the Lyre, and some of the British Isles Celtic regions have examples too, is an example of a metal strung instrument of this type as was the Plucked Crwth. The metal strings give a more singing, jangling tone. but these were rare due to the cost and the skill required to spin such thin strands of fine metal. Nowadays most replica and new Lyres use a material called Nyl-gut which lasts longer, is impervious to rotting, and sounds more deep throated and rounded with a fuller tone production. They should last the lifetime of the instrument if not the player.
The Soundboard/Face 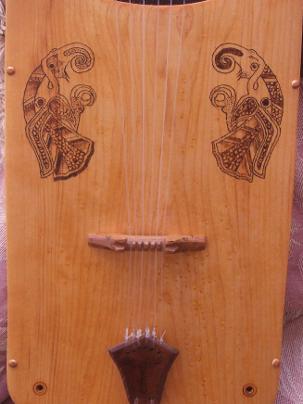 The main body of the instrument was usually made from a hard wood such as Oak, Maple, Walnut or Ash for its durability and strength but in the case of the Kravik Lyre it was Pine wood which was very unusual. The Soundboard or face, as it is sometimes called, that sits on the "face" of the hollowed out body was usually made from a more resonant wood such as Maple or even a soft wood such as Cedar. It was not uncommon though to sometimes have the face made from the same wood as the body such as Oak but this gave a much duller darker tone quality to the instrument. Sometimes, as in the picture below, 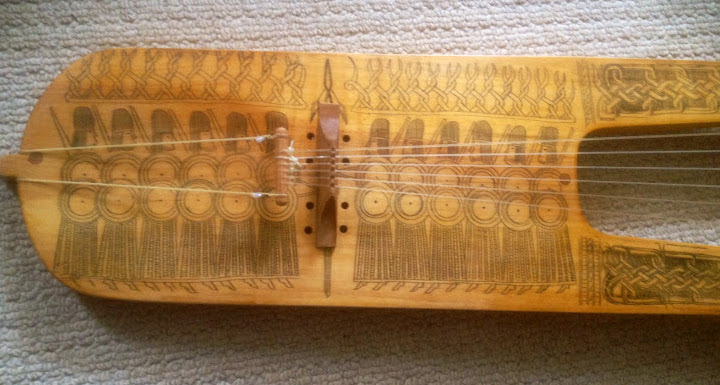 Detail of a 'Kolrosing' technique of a traditional design method on a copy of the Trossingen Lyre made by Michael J King showing the painstaking work involved in the intricate decoration.
and in the photograph of my own Lyre above that, and below, the face board was occassionally covered in designs that depicted scenes from the Poetic Edda or Sagas or characters from the belief system of the people. My version has Pyrographic designs taken from Anglo Saxon artwork burnt into the wood to decorate it. These are taken from the ancient pre-Christian artworks and tales. 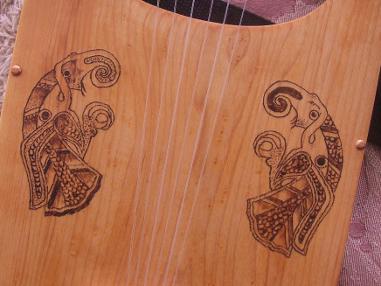 This gives my Lyre its name, "Two Ravens". These are the two Ravens that gather the news of what has happened in the world each day and fly back to Woden (Odin) and whisper the happenings into the Gods ear so that he knows exactly what is going on in Midgard. They are called Huggin (memory) and Munnin (thought), which is why Woden is very often depicted with these two birds.
The Body 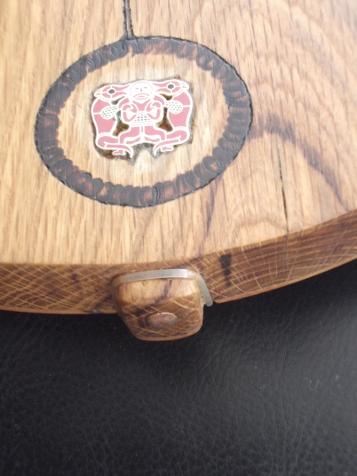 The body of the instrument is usually made from two pieces of hard wood. The head/stock is usually separate and then attached to the arms and body through jointing and then strengthening with boss's. The wood was usually Oak, or the holy Ash, or similar woods and the main body is hollowed out creating a resonating chamber that the sound is amplified by. In the "Two Ravens" Lyre, above, the detail that you see comes from a design called Walkyrie Wings and is burnt into the back of the oak body along with the inlay of King Radwald (or possibly Woden) flanked by Keerie and Meerie, Woden's Wolves. The inlay is taken from the Sutton Hoo Ship burial finds and is from the clasps of the Kings purse.
The Bridge 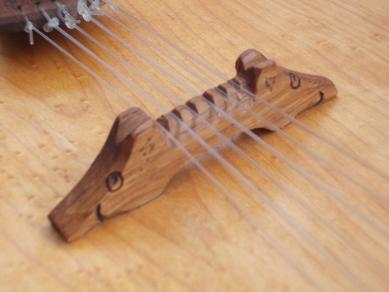 The bridge is the most vital part of the instrument and is the most carefully prepared, sanding, carving shaping etcetera. It is just like any other bridge on any other stringed instrument. It must have full contact with the face of the soundboard or else the resonance of the strings will not vibrate in the body of the instrument and the sound and volume will be lost. The strings pass over it and allow the resonance of the plucked string to pass through it and into the body chamber. These bridges were sometimes very ornate affairs and the one I have on my Lyre has a stylised double headed boar's head design to link it back to the Anglo Saxon period. The boar was highly significant in Anglo Saxon and Norse mythology due to Woden's wife/Goddess Freya riding one into battle. Also at the New Year celebrations, after the 12 days of Yule, oaths of fealty and daring do would be sworn on the back of a live boar that would be brought into the Mead Hall of the tribe. Probably a very wild and raucous affair with such an aggressive animal trapped in a large hall full of drunk and boasting warriors.
The Tail Piece 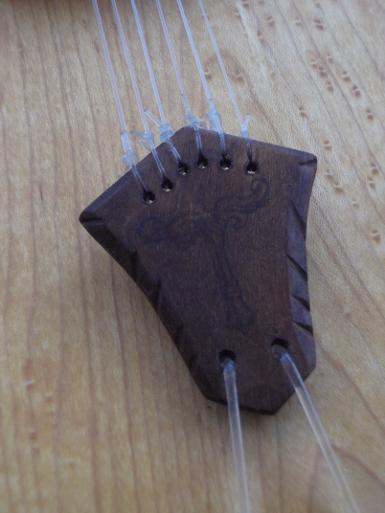 This was a utilitarian piece of flat wood that connected the strings to the 'Tail' of the Lyre and could vary in size, elaboration and design. I prefer to use Walnut as it is a much denser wood and can take the strain more than most woods. Some tails are of metal and others have been found of bone. The above photograph of the tail piece has the Woden design found on the helmets of some Anglo Saxon War Helmets like that found at Sutton Hoo. Note how the strings are tied to it.
The Tail 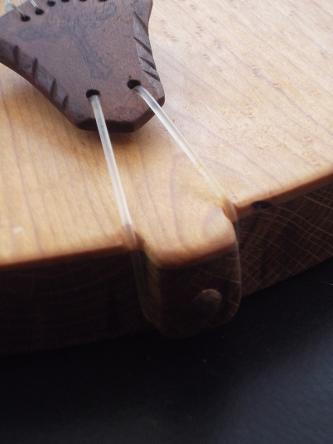 The tail is a nodule of wood that juts out from the bottom of the body of the instrument. It may be from the original cutting of the wood and remains attached (as in the picture above), or it can be attached to the body either by drilling into the body and glueing it, or even, as I have seen, screwed into the bottom of the wood, these latter two are not ideal and do have an effect on the overall resonance and in turn sound. This nodule is shaped with a groove on the bottom and the sides. This has a piece of Nyl-gut looped around it which is then attached to the bottom of the tail piece to hold it in place. It takes the strain of the strings as they are tuned up to the desired pitches. In the picture you can see a copper tack in the tail. This is to serve as decoration as well as protection from any bangs as it does jut out of the body and also it adds a little more strength to the structure of the tail itself without any loss of sound production. 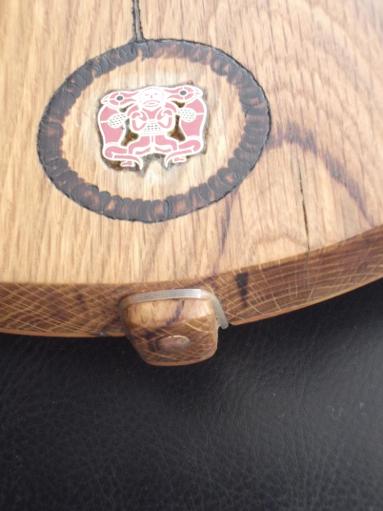