Tuning of the Strings?

Tunning the Anglo Saxon Lyre is not a difficult process and follows nearly all string instruments in its technique of tightening up the strings with a suitable instrument key. The tighter you have the string the higher the strings pitch will be. If you look at the picture below you will see a copy of the Sutton Hoo Lyre. The strings should always be tunned from the left to the right for ease of playing, (opposite to that of a Harp) so the string nearest the body of the player will be the lowest note and so on across all six strings to the string farthest from the players body which will be the highest pitched. 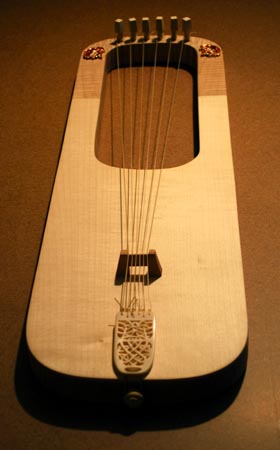 The string on the left will be the lowest tuned string and the farthest one on the right will be the highest.
As already state the tuning of the Anglo Saxon Lyre is completely unknown. So the idea of a fixed tuning, like say a Violin, is an anathema. The instruments tuning is one of subjectivity by the player rather than objectivity of a performance norm. Like its larger Celtic neighbours, the Celtic Knee Harp or Scottish Clarsach, the tunings have to be fixed before a piece is played and again the actual tuning is predominated by a number of performance and aesthetic factors.

These may seem obvious from the outset but they are important factors to consider when choosing your chosen scale or pitches to tune the strings to.

The Ancient Greek Modes and their modern naming system.
We can certainly rule out the usual Major or Minor tempered scales as the norm for the reason stated above. In fact we can almost without doubt even rule out the modal tuning of the Greek philosophers, including Pythagoras, due to the following reason too if we are after a truly pseudo-authentic tuning system.

All music from around the mid 6th century became codified according to the theories put forward by the Roman musical writer, senator, consul and philosopher Anicius Manlius Severinus Boëthius, commonly called Boethius (480 - 524 AD) who used the Greek theories as his basis. This undoubtedly was adopted by the Anglo Saxon scops..........finally, but not until a later period possibly from around the mid 7th century, as can be seen by what little (and it is miniscule in amount) ecclesiastical music survives from that period. We can safely state that before the gradual conversion to the scalic intervalic theory of Boethius that the tunings used would not have been of this type, and would have been totally untempered in nature.

A brief definition needs to be given here of what untempered and tempered scaling is (temperament and equal temperament in other words). This may be opening a can of worms by even discussing this but here goes.

"Temperament. A tuning of a scale in which most or all of the concords are made slightly impure in order that none or few are distastefully so. Equal temperament, in which the octave is divided into 12 uniform semitones, is the standard Western temperament today except among specialists in early music."
The Grove Concise Dictionary of Music

Not an easy thing to explain. Before the tempering (equaling out) of the intervals the notes were tuned to the next one which gave a slight out of tune effect when the fifth and the octave were reached or sounded together. Not unpleasantly so, but none the less, to our modern ears it sounds slightly odd. There is plenty written about this subject so good luck wading through it all. Some PhD thesis are based solely on this rather geeky subject and reputations have been made and destroyed on it.

So although some basic musical knowledge of these theories of Boethius would have filtered through the musical world of the day, probably via the Norse connections with the trading points of the Mediteranean and the ancient world, it is doubtful that they would have been accepted easily, understood or adapted to the early Anglo Saxon period instruments. Any scaling of the instrument from this early period has to be, by its very nature, speculative and conjectural.

Many theories have been advanced over the last few years for possible tuning systems on the Lyre, but few hold water.

It is my own personal thought that tunnings were, and should be, a solely personal choice affected by the music to be played and the mode of expression desired in the performance. This may seem obvious, but, as with many things people feel the need to codify and enforce rules on ideas and objects to bring so called order and uniformity to chaos. This is not to dismiss the idea that there probably were rules, and these were originally passed on from mentor to pupil, scop to scop, until these were probably written down as a codifying system as literacy took hold amongst the Englisc of the 9th and 10th centuries. That was under Alfred the Great and his offsprings reigns and the creation of one England after the devastation of the Viking Wars. Unfortunately if there were written rules and evidence it has not survived the rigours and devastation of time itself.

So there you are, sat there, with a standard six string Anglo Saxon Lyre on your lap, but what pitches do you tune the strings to? 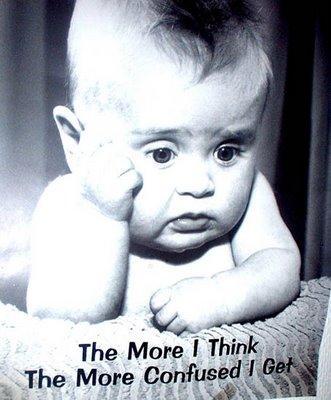 I am so confused now!!!!!!!!
As I have already discussed the choice of tuning is entirely up to the player. Obviously there are certain restrictions placed upon you with an instrument that only has six or so strings. If you tune it too low the strings become flaccid and inefectual, if you tune them too high you may brake a string, or worse cause damage to the actual integrity of the body of the Lyre. So obviously you have to compromise and accept the instruments physical limitations. I have heard both problems in live performances and it certainly is not a pleasant thing to behold or hear.

So what tuning should you choose? Many players appear to prefer major or minor scaling, although this is not original. This is modern in its performance approach. A historical performer may more likely choose a modal tuning for the style of music they will be performing. Some, more folk and world music players than others, have a tendancy to choose and prefer a pentatonic or modal inflected tuning such as:

These are pentatonic scales on C, but for your Lyre you would need to start at the best pitch for your instrument. For my own it starts on F/F# G or G#. I prefer G.
I have personally experimented with various step wise scales and tuning and the list below are just some of the ones I have tried and experimented with over time beginning on my favoured lowest string resonance of G. There is no reason why you have to tune in a step wise order, you may find missing a step is as effective for your style of music.

These appear to work well for my own instrument. They are in descending order of preference with No.1 the tuning I use the most. In this sound example below (tuning No.1) from my album "Mead Hall: Laments, Lays and Idyls" you can hear the effect of using a sensible and well chosen tuning enabling the stylistic, tonal, timbral and melodic experimentation to be engaged with fully. Also note the two handed playing section which I shall deal with in the Playing Techniques section.
"Children of Ing (part I)" by Andrew Glover-Whitley from the Album "Mead Hall: Laments, Lays and Idyls". Scale No.1 is the tuning here.
Do remember once the tuning is set it cannot be altered in the duration of a piece without a tuning key and a lot of problems and time.

In the above tuning examples I am playing to the strengths of the physical presence of my own instrument and of course these will alter from one instrument to another and from one player to another. You can make up your own scales, and even tune microtonaly if you wished to (quarter and even eighth tones) which sounds strange and eerie and takes some getting used to, but then why not.

So in conclusion, there is no set tuning and this is very much to personal preferences and the limitations of your own Lyre. Experiment and try various possibilities out. You will eventually find one that appeals to you more and works well for your own Lyre and the music you are wanting to play. Also are you going to use tempered or untempered intervalic rules. Your choice.